?
You're burned into my mind forever. There is nothing, nothing in this world that will ever change that.
Nazaj na vrh

1.) Ex-mas by Kate Brian
2.) Snowed In by Rachel Hawthorne
3.) The Best Girl by Emma Harrison
"Can nobody hear me? I've got a lot that's on my mind."
Nazaj na vrh

Winter's Tale
New York City is subsumed in arctic winds, dark nights, and white lights, its life unfolds, for it is an extraordinary hive of the imagination, the greatest house ever built, and nothing exists that can check its vitality. One night in winter, Peter Lake--orphan and master-mechanic, attempts to rob a fortress-like mansion on the Upper West Side.

Though he thinks the house is empty, the daughter of the house is home. Thus begins the love between Peter Lake, a middle-aged Irish burglar, and Beverly Penn, a young girl, who is dying.

Peter Lake, a simple, uneducated man, because of a love that, at first he does not fully understand, is driven to stop time and bring back the dead. His great struggle, in a city ever alight with its own energy and beseiged by unprecedented winters, is one of the most beautiful and extraordinary stories of American literature.

Sun and Moon, Ice and Snow
Blessed—or cursed—with an ability to understand animals, the Lass (as she’s known to her family) has always been an oddball. And when an isbjorn (polar bear) seeks her out, and promises that her family will become rich if only the Lass will accompany him to his castle, she doesn’t hesitate. But the bear is not what he seems, nor is his castle, which is made of ice and inhabited by a silent staff of servents. Only a grueling journey on the backs of the four winds will reveal the truth: the bear is really a prince who’s been enchanted by a troll queen, and the Lass must come up with a way to free him before he’s forced to marry a troll princess.

Icebound
A thrilling adventure of science gone wrong and psychopathic terror in the polar icecaps by a modern master of horror and suspense.


The Game of Thrones

In Silent Night, America's most beloved writer of suspense has crafted a very special story about the power of love, and of a child's courage and faith.

When her husband was diagnosed with leukemia, Catherine Dornan and their two young sons accompanied him to New York, during the Christmas season, for a life-saving operation.

Hoping to divert the boys from worry about their father, and to temper her own near despair, on Christmas Eve Catherine takes the boys to see Rockefeller Center's famous Christmas tree. When they stop to listen to a street musician, Brian, the younger boy, sees a woman take his mother's wallet, which holds a precious memento his grandmother has just given them, a St. Christopher medal that saved her husband's life in World War II, and which she and Brian believe will save his father's life now.

Unable to get his mother's attention, Brian impulsively follows the woman who has taken the wallet into the city's subways, thereby beginning a journey that will threaten his life and change that of his mother and of the thief, as well.

Written with warmth, yet set against a background of menace and thrilling suspense, Silent Night is about courage in the face of adversity, and faith renewed and faith rewarded.

It is Mary Higgins Clark's Christmas gift for readers of all seasons.

Dashing Through the Snow 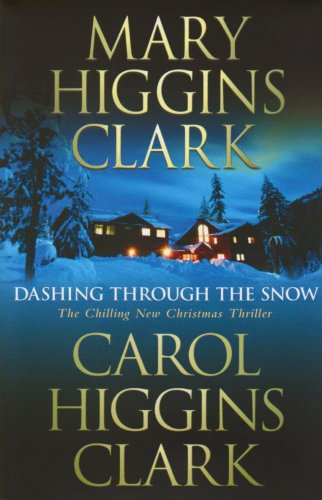 In the picturesque village of Branscombe, New Hampshire, the townsfolk are all pitching in to prepare for the first (and many hope annual) Festival of Joy. The night before the festival begins, a group of employees at the local market learn that they have won $160 million in the lottery. One of their co-workers, Duncan, decided at the last minute, on the advice of a pair of crooks masquerading as financial advisers, not to play. Then he goes missing. A second winning lottery ticket was purchased in the next town, but the winner hasn't come forward. Could Duncan have secretly bought it?

The Clarks' endearing heroes  Alvirah Meehan, the amateur sleuth, and private investigator Regan Reilly  have arrived in Branscombe for the festival. They are just the people to find out what is amiss. As they dig beneath the surface, they find that life in Branscombe is not as tranquil as it appears. So much for an old-fashioned weekend in the country. This fast-paced holiday caper will keep you dashing through the pages!

"Alvirah Meehan, the lottery winner turned amateur sleuth, teams up with private investigator Regan Reilly to solve another Christmas mystery. In Deck the Halls, they rescued Regan's kidnapped father. This time they get in the middle of a case onvilving a beautiful eighty-foot blue spruce that has been chosen to spend the holidays as Rockefeller Center's famous Christmas tree. The folks who picked the tree don't have a clue that attached to one of its branches is a flask chock-full of priceless diamonds that Packy Noonan, a scam artist just released from prison, had hidden there over twelve years ago." "An excited Packy breaks his parole and heads to Stowe, Vermont, to reclaim his loot. Once there, he is horrified to discover that his special tree will be heading to New York City the next morning. With a bumbling crew consisting of Jo-Jo, Benny, and an unsuccessful poet, Milo, he knows he has to act fast." What Packy does not know is that Alvirah and Regan are on a weekend trip to stowe with Alvirah's husband, Willy; Regan's fiance, Jack; Regan's parents, Luke and Nora; and Alvirah's friend Opal, a lottery winner who lost all her winnings in Packy's scam. On Monday morning when they're suppose to head home, they learn that the tree is missing, Packy Noonan may be in the vicinity, and Opal has disappeared.

From a master of contemporary fantasy comes a novel of imaginative power unlike any you've ever encountered...

In A Game of Thrones, George R.R. Martin has created a genuine masterpiece, bringing together the best the genre has to offer. Mystery, intrigue, romance, and adventure fill the pages of the first volume in an epic series sure to delight fantasy fans everywhere.

In a land where summers can last decades and winters a lifetime, trouble is brewing. The cold is returning, and in the frozen wastes to the north of Winterfell, sinister and supernatural forces are massing beyond the kingdom's protective wall. At the center of the conflict lie the Starks of Winterfell, a family as harsh and unyielding as the land they were born to. Sweeping from a land of brutal cold to a distant summertime kingdom of epicurean plenty, here is a tale of lords and ladies, soldiers and sorcerers, assassins and bastards, who come together in a time of grim omens. Amid plots and counterplots, tragedy and betrayal, victory and terror, the fate of the Starks, their allies, and their enemies hangs perilously in the balance, as each endeavors to win that deadliest of conflicts: the game of thrones.

"Reminiscent of T.H. White's The Once and Future King, this novel is an absorbing combination of the mythic, the sweepingly historical, and the intensely personal." --Chicago Sun-Times

"The Grinch hated Christmas! The whole Christmas season! / Now, please don't ask why. No one quite knows the reason." Dr. Seuss's small-hearted Grinch ranks right up there with Scrooge when it comes to the crankiest, scowling holiday grumps of all time. For 53 years, the Grinch has lived in a cave on the side of a mountain, looming above the Whos in Whoville. The noisy holiday preparations and infernal singing of the happy little citizens below annoy him to no end. The Grinch decides this frivolous merriment must stop. His "wonderful, awful" idea is to don a Santa outfit, strap heavy antlers on his poor, quivering dog Max, construct a makeshift sleigh, head down to Whoville, and strip the chafingly cheerful Whos of their Yuletide glee once and for all.

Looking quite out of place and very disturbing in his makeshift Santa get-up, the Grinch slithers down chimneys with empty bags and stealing the Whos' presents, their food, even the logs from their humble Who-fires. He takes the ramshackle sleigh to Mt. Crumpit to dump it and waits to hear the sobs of the Whos when they wake up and discover the trappings of Christmas have disappeared. Imagine the Whos' dismay when they discover the evil-doings of Grinch in his anti-Santa guise. But what is that sound? It's not sobbing, but singing! Children simultaneously adore and fear this triumphant, twisted Seussian testimonial to the undaunted cheerfulness of the Whos, the transcendent nature of joy, and of course, the growth potential of a heart that's two sizes too small. This holiday classic is perfect for reading aloud to your favorite little Whos. [Ages 4 to 8

)
You're burned into my mind forever. There is nothing, nothing in this world that will ever change that.
Nazaj na vrh

weep not for roads untravelled, weep not for sights unseen,
may your love never end, and if you need a friend,
there's a seat here alongside me.
Nazaj na vrh
Zakleni
24 prispevkov