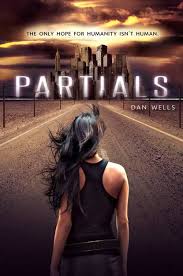 Humanity is all but extinguished after a war with partials--engineered organic beings identical to humans--has decimated the world’s population. Reduced to only tens of thousands by a weaponized virus to which only a fraction of humanity is immune, the survivors in North America have huddled together on Long Island. The threat of the partials is still imminent, but, worse, no baby has been born immune to the disease in over a decade. Humanity’s time is running out.

When sixteen-year-old Kira learns of her best friend’s pregnancy, she’s determined to find a solution. Then one rash decision forces Kira to flee her community with the unlikeliest of allies. As she tries desperately to save what is left of her race, she discovers that the survival of both humans and partials rests in her attempts to answer questions of the war’s origin that she never knew to ask.
"Sticks and stones may build your homes, but words will lift your spirits."
Abigail Roux & Madeleine Urban
Nazaj na vrh

Kira Walker has found the cure for RM, but the battle for the survival of humans and Partials is only just beginning. Kira has left East Meadow in a desperate search for clues as to who she is. That the Partials themselves hold the cure for RM in their blood cannot be a coincidence—it must be part of a larger plan, a plan that Kira knows she is a part of, a plan that could save both races. Her allies are Afa Demoux, an unhinged drifter and former employee of ParaGen, and Samm and Heron, the Partials who betrayed her and saved her life, the only ones who know her secret. But can she trust them?

Meanwhile, back on Long Island, what’s left of humanity is gearing up for war with the Partials, and Marcus knows his only hope is to delay them until Kira returns. But Kira’s journey will take her deep into the overgrown wasteland of postapocalyptic America, and they will both discover that their greatest enemy may be one they didn’t even know existed. Two decades before the events of Partials, the world was locked in a different battle for survival: a global war for the last remaining oil reserves on the planet. It was for the Isolation War that the American government contracted the ParaGen Corporation to manufacture the Partials—our last hope in reclaiming energy independence from China. And it was on these fields of battle that the seeds of humanity's eventual destruction were sown.

Isolation takes us back to the front lines of this war, a time when mankind’s ambition far outstripped its foresight. Heron, a newly trained Partial soldier who specializes in infiltration, is sent on a mission deep behind enemy lines. What she discovers there has far-reaching implications—not only for the Isolation War, but for Partials and humans alike long after this war is over.

A powerful take of our world on the brink, Isolation gives readers a glimpse into the history from which Partials was born—as well as clues to where the Partials Sequence is heading next.

To je to, ja.
"Sticks and stones may build your homes, but words will lift your spirits."
Abigail Roux & Madeleine Urban
Nazaj na vrh